He has learned through his experience to create dishes that entice guests, using local ingredients to deliver his vision of good food that is both comforting and elegant. Mark is a very interesting individual, but I am here to meet Chef Geoffrey Caliger, the new Executive Chef of Liberty Food & Wine Exchange. I spoke with him about his new role, his culinary credentials, and what he holds most important—his family. 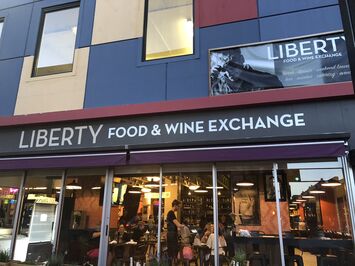 Chef Geoff is a non-assuming man. His smile engages his audience. Chefs have different personalities and appearances. It is hard to say there is one particular characteristic for a chef, but there are traits they all share: staunch confidence, a driving ambition to be great in the kitchen, and a need to remember where they came from. Though some may disagree about remembering humble beginnings, when one is responsible for feeding hundreds of people breakfast, lunch and dinner, one must be a badass in project and people management! 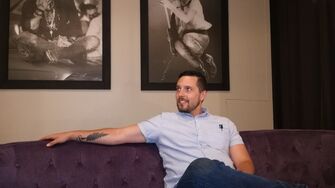 Of course I speculate that he started so young because he had such a love of cooking. He surprises me by saying, “I got into the kitchen because when I was in high school, my family had lost everything, and I needed to work to help provide for them. I started in construction and needed a job in the wintertime. Living in Lake Tahoe, there is not a lot of internal remodeling or construction going on during winter, so I hopped on with Womax BBQ.”

Our interview begins at the chef’s beginning, “So, Chef Geoff, how long have you worked in a restaurant?” “I’ve been in the kitchen since I was sixteen years old, and I’m twenty-seven right now, so about eleven years.”‍‍‍

He talks about his duties at Womax BBQ, so I inquire. “Did you get to smoke the ribs or BBQ?” He smiles with the reply, ”I was a dishwasher who was allowed to eventually dry-rub the ribs.” “I learned temperature control for cooking the ribs and a few tricks for potato salad and French fries.” In the kitchen he found solace, and it helped him manage the unhappiness he experienced so young.

Geoff did tell me the secret to the perfect French fry:  Wash away the sugars and starch of the potatoes before frying. Great tip!

After high school, he went to Phoenix, Arizona to attend Arizona State University. With his truck and a little money from his grandfather, he set out to experience the world and decide upon his major in college.

“Culinary school was cool.” Geoff loves to work with his hands, so he thought about being a mechanic, but he rethought his studies and decided on culinary school. “I didn’t know a lot about cooking. I love food; I love to eat. I knew that the most expensive thing, if I had to go to school, would be food. So I figured, if I went to culinary school, I wouldn’t need to pay for my food because I would get to eat all of the time.” He barely cracked a smile. I find his reasoning completely logical and humorous at the same time. It’s his personality.

“I worked in restaurants because I got to meet a lot of people and eat!” “Do you have a fetish for anything specific in the kitchen,” I ask? “I like wood-fire grills and wood-burning ovens, and I am partial to specific spoons and knives and classical cooking techniques.” He then smiles and says, “I think the combi-oven is one of the most amazing things ever created.” While working at Bourbon Steak, for Chef Michael Mina, in Scottsdale, Arizona, he was exposed to the combi-oven. A combi-oven is a very large oven that uses both dry heat and steam, replacing several appliances in a professional kitchen. At Bourbon Steak, he learned to use the combi-oven to sous vide various items, such as ribs and vegetables. “They are very expensive, particularly when they break. And they do break,” he says. 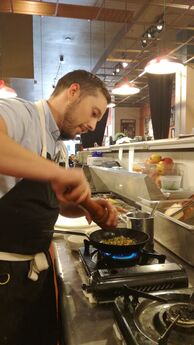 “Do you have a favorite cuisine?”  “Food,” he responds. “Yeah, food is my favorite cuisine.”  I should have expected an answer like that coming from someone who delivers one-liners like they are garnish on a dish. Though he doesn’t have a singular favorite cuisine to cook, he enjoys dishes from India, the Middle East, and Asia. He prefers food that many cultures, the world over, have paired together, but his favorite—the one he could eat every day—is Thai cuisine. He finds the pairings, herbs and spices, the exotic ingredients of Thai cooking exhilarating and challenging. “When I create a dish, I think about the ingredients, and how I can make one ingredient stand-out above the others.” It is this quality—exalting one element above a multitude of ingredients—that he admires in Thai cooking.

Our conversation turns to his life after culinary school. He was a young chef who was ready to take on a kitchen of his own. HIs past work experience brought him to a restaurant named Culinary Dropout. He worked for them in Arizona. They sent him to Austin, Texas to open a new location in late 2016.  When he arrived in Texas, he was recently married, and the couple was expecting their first child.

As a new chef, Geoff spent a lot of hours on the job, so his wife and new baby boy spent a lot of time alone. In 2017, “I realized that I wanted to move back home for my wife and son.” Instead of choosing his career and staying in Austin at Culinary Dropout, Geoff searched for a way to move his family near Lake Tahoe and his family, which still resides on its shores. His wife and baby boy, and their happiness, became his priority. He put their needs on par with his career, deciding he would expedite his plan to find a kitchen to work in near Lake Tahoe. 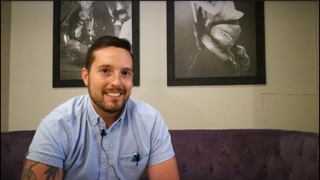 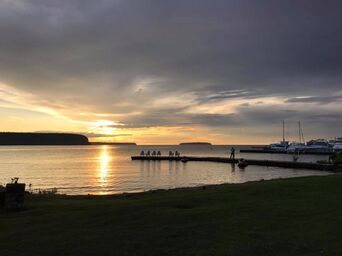 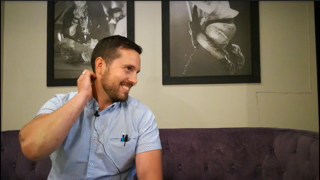 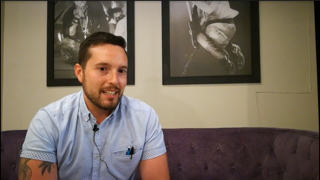 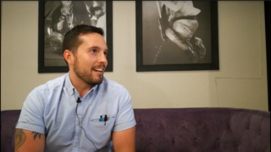 Chef Geoffrey Caliger is the new Executive Chef at Liberty Food & Wine Exchange, but he is not a shy chef, nor boisterous or demanding in the kitchen. He is matter-of-fact, using wit to remind his chefs and kitchen staff  that the food will feel stress and unhappiness, so keep a sense of humor while cooking and prepping.  He frequently breaks up serious conversations with one-liners that no one is quite sure about until much later in the conversation. He admires focus, intelligence, and consistency in the kitchen, demanding quite a bit from himself.

Welcome Chef Geoff, we look forward to enjoying your creations.

Fast-forward to January 2018: Geoff and his young family are still in Austin.  As he is a determined man, Geoff makes the decision to use his vacation time to meet with Mark Estee and see if he there is a place for him at Liberty Food and Wine. “I asked my brother which restaurant was the best in the area.” His brother told him that LIberty Food & Wine Exchange was the best in Reno.  In March 2018, Mark and Geoff met. Geoff was introduced to Mark’s teams and venues. It was a fit, and Mark offered Geoff the job. 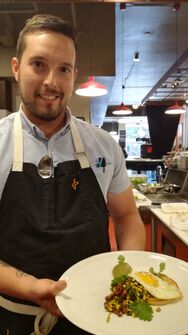 Many thanks to Owner and Chef, Mark Estee, and Executive Chef, Geoff Caliger for your time, candor, and finesse in the kitchen.

In one will be a pat of butter melted, then add an egg, sunny-side-up, left to slowly cook on low flame. Meanwhile, on the grill, place the arepa in a puddle of melted butter, and let it slowly heat through--remember to flip it over in the midst of the egg cooking.

In the second frying pan, cook the shallots and garlic first, then add the corn, bacon and fire-roasted poblano peppers. Let all of these items heat through, so the bacon is fully cooked. Remember to flip the arepa in the middle of the egg cooking.  To prepare the plate, smear some tomatillo salsa to the side, leaving plenty of room for the arepa, bacon and egg. Once the egg is done, and the bacon concoction is cooked, place the arepa on the plate and top with the bacon, corn and poblano peppers.  Add the egg to the pile, sunny-side-up! 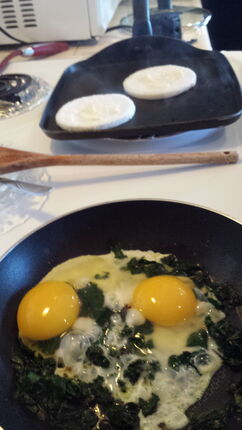 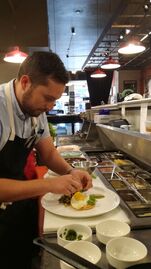 Liberty Food & Wine Exchange is located on the corner of Sierra and 1st streets in downtown Reno, Nevada. Chef Mark Estee owns several restaurants, and all of them are successful. 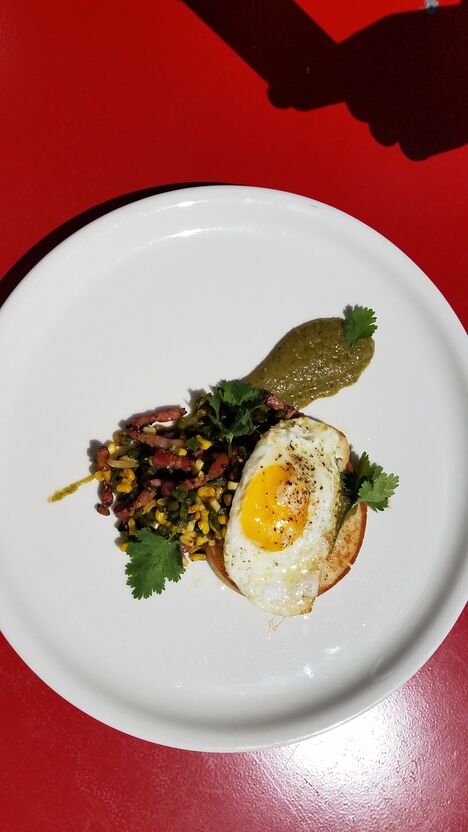